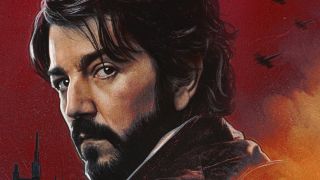 We mentioned in last week’s introduction that House of the Dragon and The Rings of Power are dominating the cultural conversation right now, and while both series continue to do so as we move towards October, the folks over at Disney Plus have seen fit to throw yet another headline-grabbing TV show into the mix.

But it isn’t all lightsabers and speeder bikes this weekend, and below, we’ve detailed six more movies and TV shows heading to Netflix, Prime Video, HBO Max and other streaming services over the next few days.

There really has never been a better time to be a Star Wars fan. Sure, the sequel trilogy didn’t pan out quite as well as Lucasfilm and Disney intended, but the duo are churning out interesting Star Wars-set stories at what seems like hyperspeed pace in 2022.

The latest offering is Andor, a 12-episode series charting the exploits of scoundrel-turned-rebel Cassian Andor (Diego Luna) and his role in the early days of the Rebel Alliance. Set five years before the events of Rogue One, the show finds Cassian on the run from the Galactic Empire before being swept up in a Jason Bourne-style tale of interstellar espionage.

In our review, we described Andor as “a blood-pumping spy thriller that might be the best Star Wars show yet” – which is high praise indeed given how much we enjoyed the first two seasons of The Mandalorian. Andor episodes 1-3 are streaming now on Disney Plus, with the remaining nine entries set to arrive every Wednesday.

Now available to stream on Disney Plus.

From the mind of Modern Family co-creator Steven Levitan comes Reboot, a new comedy series now streaming on Hulu and Disney Plus (depending on your region).

Reviews for Reboot have been generally positive so far, with critics praising the series’ corny humor and timely satire. Its first two episodes are available to stream now, and will be followed by weekly installments through October 25.

Now available to stream on Hulu in the US and Disney Plus in the UK.

at Hulu (opens in new tab)
Get First Month Fr…

at Hulu (opens in new tab)

For our money, Nat Geo’s The Rescue (available via Disney Plus) was the best documentary of last year, while Prime Video’s recent dramatization of the same events, Thirteen Lives, was equally moving. Netflix, then, has a task on its hands to prove why its own adaptation of the headline-grabbing 2018 incident should demand your attention.

Thai Cave Rescue, the streamer’s eight-part limited series, does at least mix things up by recounting events from the perspective of the boys at the heart of this incredible story. It’s also the only production to have obtained likeness rights from the actual Wild Boars soccer team.

Critics have therefore praised Thai Cave Rescue for its accuracy and willingness to bring something new to the table – although viewers are advised to watch the series in its native Thai audio (rather than Netflix’s automatically-enabled English dub).

Now available to stream on Netflix.

Veteran cinematographer Anna Foerster is the name behind the camerawork of several big-time Hollywood hits (including 2013’s White House Down), but now the specialist becomes a full-blown feature film director with Lou.

The plot of this new Netflix movie is simple: when a young girl (Ridley Asha Bateman) is kidnapped, her mother (Jurnee Smollett) teams up with the mysterious loner living next door (Allison Janney) to pursue her captors.

If that synopsis sounds similar to that of Taken (but with Janney in the role of Liam Neeson’s character), that’s because it is – but the majority of critics have praised Lou for standing on its own two feet as a solid action thriller, despite its familiar premise.

Now available to stream on Netflix.

For various reasons that we won’t go into here, Pete Davidson has had one helluva year. But this weekend, at least, the comedian returns to the big screen in Peacock’s Meet Cute.

A feature-length rom-com from director Alex Lehmann, Meet Cute stars Kaley Cuoco (The Flight Attendant) as Sheila, a troubled young woman who, after discovering a time machine in a nail salon, decides to relive her past and mold her boyfriend, Gary (Davidson), into the perfect man. Naturally, things go awry, and Sheila quickly realizes that her well-intentioned actions could have potentially catastrophic consequences.

Meet Cute has earned plaudits for attempting to mix-up the rom-com genre, but most reviewers have described the movie as ultimately unfulfilling. Sorry, Pete.

Now available to stream on Peacock.

This week’s documentary pick is Escape From Kabul, which is proving the subject of much awards chatter in certain filmmaking circles.

This HBO production – created in collaboration with the BBC – examines 18 hectic days in August 2021 when thousands of Afghan citizens descended on Kabul airport following the Taliban’s seizure of the city.

Escape From Kabul features never-before-seen footage and exclusive interviews from Afghan citizens, US Marines and even members of the Taliban, and the documentary has been described by critics as “horrendous” and “heartbreaking”.

There’s always one major streamer whose content offering lags behind the competition in any given week, and that mantle falls to Prime Video on this occasion.

Still, Amazon’s platform does have something new to offer this weekend in the form of Prisma, an Italian-language series exploring the relationships and identities of two identical twins, Marco and Andrea (both played by Mattia Carrano).

We can’t speak for the show’s critical reception just yet, but Prisma nonetheless looks like an engaging and important conversation-starter about gender identity and brotherhood.

at Amazon (opens in new tab)

When Priyanka Chopra Jonas Revealed Being Bullied & Called ‘Brownie’ For Being Indian: “Destiny Played Its Game When I Went Back Home”

EXCLUSIVE: Jackie Shroff misses old ways of promotions when journalists would visit sets: ‘They would spend entire day during shoot’

Canceled: Netflix axes big-budget Grendel before show is even finished

Warina Hussain amps up her fashion game in this Navratri Look

Does Intel Raptor Lake have a secret weapon 34-core CPU?