Duchess of Sussex Meghan Markle seemed quite emotional during the state funeral of her late grandmother-in-law, Queen Elizabeth II on Monday. The former actress was seen along with her husband, Prince Harry, and the members of the royal family. 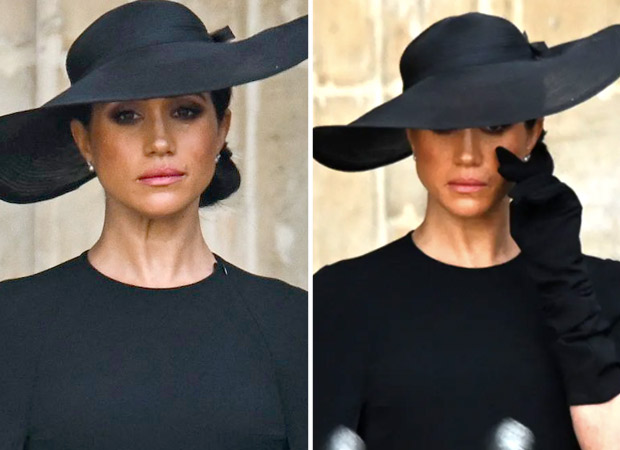 According PEOPLE magazine, the 41-year-old Duchess of Sussex was photographed wiping away a tear following the service honoring the Queen at London’s Westminster Abbey on Monday.

Earlier, Meghan Markle joined her husband, Prince Harry at Westminster Abbey where they sat in the second row for the funeral service. Emotional moments unfolded outside Westminster Abbey before the late monarch’s coffin was taken to Wellington Arch in Hyde Park. Following the end of the funeral service, British troops carried Her Majesty’s coffin out of the cathedral before it was driven to Wellington Arch for a final salute from soldiers. It was then transported to Windsor’s St. George’s Chapel, which will be her final resting place.

While Meghan and Prince Harry’s two children, Archie and Lilibet, did not attend the Westminster Abbey proceedings, their niece and nephews — Prince George and Princess Charlotte — walked ahead of the California residents when the casket was brought into the chapel.
Buckingham Palace confirmed on September 8 that the queen had died at the age of 96 after a 70-year reign — the longest ever of any British monarch. Following her death, her son Charles became King.