Fans are no stranger to the charms and vocals of the girl group TWICE. All nine members of the group – Nayeon, Jeongyeon, Momo, Sana, Jihyo, Mina, Dahyun, Chaeyoung, and Tzuyu – are a talented bunch of individuals who have not only shown their skills as a group but also as individual artists. The group’s eldest Nayeon made her solo debut earlier this year with the mini-album POP!, becoming the first member of the group to do so. Even before her solo debut the songstress was known for her song writing, having contributed to TWICE’s discography. In addition to singing well in Korean, Nayeon sing equally well in English and Japanese. Her song covers posted on TWICE’s Youtube channel are a testament to that. Let’s look at five song covers by NAYEON of TWICE on the occasion of her birthday. 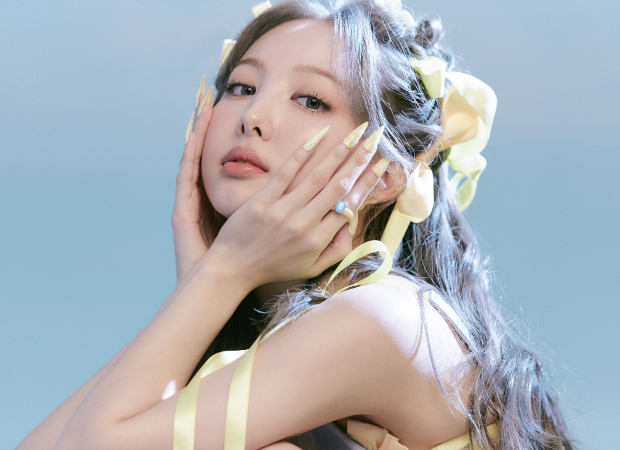 1. I LOVE… (by Official HIGE DANdism) (2020)
On her birthday last year, Nayeon released a special cover of Official HIGE DANdism’s song ‘I LOVE…’. The YouTube video features only audio, unlike the other covers where Nayeon is recorded in the studio. The image cover of this song is a collage of four pictures of Nayeon smiling at the camera. The images are decorated with birthday themed icons. Nayeon belts the lyrics beautifully as her bubbly charm seeps into the song.

2. LOVE IS EVERYTHING (by Ariana Grande) (2020)
Christmas songs always bring a cheer, and Nayeon’s rendition of Ariana’s hit track ‘Love is Everything’ is no different. The music video is a part of the Melody Project series by the members of TWICE. It features Nayeon dressed in Christmas-themed attire and prancing around the snow, preparing cakes, and indulging in the true-blue Christmas spirit. The video is styled to look like a VCR recording from the late 90s to early 2000s. Her vocals are on point as she belts out the lyrics and touches upon the notes, low or high.
Related Articles
3. FALLING (by Harry Styles) (2020)
It is not something new for the female singers to cover songs by male singers, but it sure is rare. Nayeon made a stunning attempt to cover British singer Harry Styles’ song Falling from his 2019 album Fine Line. The cover song was released in 2020, along with her cover of ‘I LOVE…’ by Official HIGE DANdism. The song is all vocals with a collage image of Nayeon in the birthday mood. Nayeon pours her soul into the song as she matches the mellow mood of the original. Her mellifluous voice is punctuated by the soft piano tones. 4. SANTA TELL ME (by Ariana Grande) (2019)
The bubbly Nayeon covered Ariana’s Christmas dance pop number ‘Santa Tell Me’ around Christmas in 2019. The singer did justice to the song with her skills, adding her own vibe to the rendition. She also strikes a good high note akin to the original. Dressed in a red sweater with an antler headband on her head, Nayeon looks cheerful as ever in the video.
5. ONLY LONGING GROWS (2017)
Back when TWICE was still new in the K-pop industry, Nayeon released a cover track ‘Only Longing Grows’. The song was originally sung by Yeo Jin, a legendary singer from the yesteryears. Nayeon’s cover is special because she dedicates the song to her members to show her affection and gratitude. The music video for the song features handpicked pictures of the group. She also performed the song with her mother at KBS Song Festival in the same year. Also Read: TWICE’s Nayeon shines bright in pop-tastic solo debut IM NAYEON – Album Review

iOS 16.1 tweaks the battery percentage yet again - but I liked how it was before

Vikram Vedha: Saif Ali Khan On Doing A Film With Hrithik Roshan Despite Knowing That He’s Bound To Get All Attention, “There…